I was born the fourth child to a German father from Kansas, and a Russian mother, who I was told was born on a boat coming to America. Apparently I was the by-product of a fabulous 35th birthday celebration that my father must have greatly enjoyed. I did the math and the numbers add up!

When I was three years old my mother suddenly died. My sister was married with a baby of her own (my niece, only one year younger than myself), and my brother was bundled off to live with my mother’s brother.

My father suffered from bouts of alcoholism and depression. He probably had PTSD considering he had served in World War II in Pearl Harbor and then again when the Korean Conflict flared up. He was not capable of taking care of a three year old girl, let alone himself.

In view of these facts, I lived with my grandparents on my father’s side of the family until I was about eight years old. My father had been seeing a woman. My grandparents instantly disliked her, and I am sure I felt some of that myself. It was no surprise then, when my father re-married and I was to have a step-mother!

My father and step mother were about 45 years old when they married, and I came to live with them at my step mother’s house. My step mother had never had children and hated them. Her favorite pastime was reminding me of that fact every chance she got. I lived within the shadows of her house staying in my room and out of the way of both of them. Truth be told, I was afraid of her. She terrified me.

I tried to be the girl she wanted me to be but, at eight years old I did not know what to do with someone like her. My step mother had grown up during the depression, raised by her grandparents who were strict with her. She applied those same rules to me. I lived in a child’s hell for many years.

In no time that first Christmas was suddenly upon us all and I wondered what the holiday would have in store for me. Christmas dinner was a lavish affair with my step mother’s German grandmother, and her first father in law in attendance.

I spent hours polishing silver for the table. China was brought up from crates in the basement and I washed and dried everything to a nice sheen. Table settings were of paramount importance to my step mother and I was instructed in the art of setting a formal dinner table.

There were candles and flowers placed in the middle of the table. Crystal glasses sparkled on the table. Napkins were folded and neatly placed to the right of each plate with the proper silverware on top. Mistakes were not tolerated!

My step mother cooked Sauerbraten, which is a German pot roast. It was her grandmother’s favorite. The sweet and sour gravy filled the house with a strong, but pleasant aroma. I remember we had mashed potatoes and broccoli. I recited the prayer I was told to say and our wine glasses were filled to the brim – including mine!  My father said, “Nostrovia,” and toasted all of us.  It was the first time I had felt part of a family in a long time. 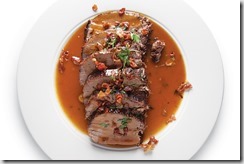 Grandma was in her late eighty’s and a total character. She spoke more German than English and I loved her sense of humor. Papa, my step mother’s first father in law was a sweet Polish man. He was younger than Grandma, but not by much. Where I grew up in Milwaukee, Wisconsin everyone was of a German or Slavic descent back then. It was a normal thing to me.

Grandma started drinking her wine and the next thing I knew she was singing the song “Silent Night,” in German to everyone at the table:

We all clapped when she finished. Papa, not to be outdone by Grandma, started singing “Jingle Bells,” in Polish!

Grandma and Papa suddenly got up from their chairs and did a little waltz around my step-mother’s kitchen. It was sweet seeing the two of them swaying in each other’s arms to music only they heard in their heads. Just outside the kitchen window snow was falling lightly, glistening in the late afternoon light.

I remember feeling a peace and belonging that day. Little did I know that in the years to come my life would change drastically and those feelings would never be the same again.

Thanks for visiting and hearing my story.

This was part of our Writing 101 assignment where we were to tell  about our favorite childhood meal — the one that was always a treat, that meant “celebration,” or that comforted you and has deep roots in your memory.  Today’s twist: Tell the story in your own distinct voice.

18 thoughts on “My first German-Polish-Russian Christmas”